4 Colours You Should Avoid To Maximise Resale Value

Selling your house can be a lot easier by choosing exterior colours that are attractive to buyers and by avoiding those that invoke a grunt.

Seoul International Colour Expo researched the effect that colour has on a buyer's conscience. A staggering 92.6 per cent of people are visually influenced in what they buy – our brains are emotionally wired to respond to colours.

Therefore, choosing the right colour for the exterior of your home is crucial if you plan to sell it one day. Although favourite colours are subjective, there are four colours that professionals in the industry suggest not to go for when painting your house.

92 per cent of people are visually influenced in what to buy – our brains are emotionally wired to respond to colours.

Black covers a multitude of sins and it can create the illusion that your house has lost a few pounds. However, the brain associates black with dark, cold and, frankly, haunted. According to Gardenesta, homes that are painted black not only have the risk of fading quickly but can also suffer from the "hothouse" effect. A black house will absorb heat and although that might be helpful in the winter, but summer is always around the corner.

Logic will tell us that the colour white should have the opposite psychological effect on our brains than black. White can give the impression of fresh and clean but colour specialist Digital Skratch also attributes it to hospitals and doctors, and that's an association you don't necessarily want with your home. The best practice is going for an off-white or eggshell colour to add a touch of warmth.

According to Pantone, trending colours for spring 2016 show that pastel pink is a popular at the moment with homeowners. However, seasons will change, and you'll be left with a shade that most buyers may not find appealing.

It's official: The world's ugliest colour is opaque couche

Its murky brown/olive tone is apparently so unappealing that it has been used on smoke packets to deter smokers in Australia. If that doesn't make you avoid the colour like the plague, then nothing will.

The agency GfK researched the colour on behalf of the Australian government, attributing it as dirty and "death-like". It is pretty safe to say that any colour that can be compared with death, should be avoided when painting your home.

Whether you dream in colour or in black and white, there is a right and a wrong shade to paint your house. Seek expert advice from colour experts and opinions from friends and then put on your painting overalls … or pay someone to put on theirs.

If you’re buying a house or just renting it, check out Peter Blackshaw for inspiring ideas to make your house a home.

4 important considerations when you are deciding to buy first or sell first5 important questions you need to ask your agent when sellingWhen is it suitable to auction your property? 5 key elements to decide4 Colours You Should Avoid To Maximise Resale Value 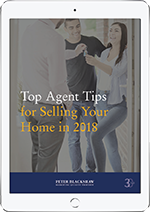 Check out our free eBook for insiders tips for selling your home in 2018.